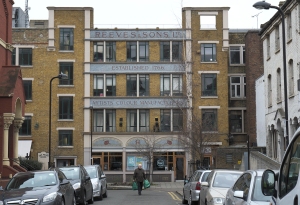 As preparation for the talk I read an interview in Photomonitor by Katy Barron .  Photomonitor is an on-line magazine that includes our own OCA tutors Jesse and Sharon Boothroyd amongst its contributors. Sharon was also our accompanying tutor and had organised the visit. 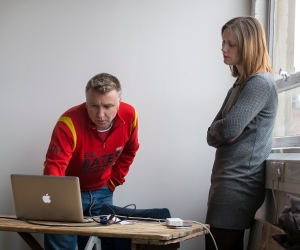 I had already seen Tom’s work in “Seduced by Art” at the National Gallery and, of course looked at his website

Two aspects struck me in particular from the Photomonitor interview concerning his attitude towards photography. The first concerns his latest pinhole work and how the lens “slowly absorbs the scene rather than grabbing or taking it” giving him time to talk with people.  The second was about people’s attitudes towards Old Masters – “Rather like going to church where you have to bow to these great masters”, and how one can forget the context of a painting so that the subject matter becomes lost in the technical detail of the painting (I hope I’ve understood that right).

Tom has a casually relaxed style; is easy to listen to; engaging and obviously passionate about his work and the area where he lives. Basically, his talk covered the areas that have already been outlined in one of the essays on his website  the difference, of course, is that listening to him speak made his journey come alive; not to mention the images he showed and explained to us. I can certainly understand how he succeeds so well in getting his subjects to co-operate with him.

He has spent a long time looking at his surroundings; exploring his own neighbourhood and using different ways to portray situations. What came through overall in his talk was certainly the way in which universal themes and situations have continued in their different forms and how they can be portrayed, in what I think of as a painterly manner, whilst using ‘ordinary’ people and their lives as a context, through the photographic medium . What’s interesting to me is that this can now be seen as experimental/conceptual rather than ‘copying/mimicking’ as it might have seemed earlier in the history of photography. It seems to me that, on the whole, anything goes in photography so long as you can justify it comprehensively and articulately using the appropriate method of communication.

The other aspect that struck me was that continual search as a photographer for new ways of looking at things and yet retaining some beliefs/attitudes/passions as a core. A humanitarian ethos of respect for others and believing in the importance of engaging his subjects in his work.  Being welded to Hackney and its people and wanting to show that ordinary people have their own unique stories which are worth the telling.  There is also his use of an artistic approach to raise contentious issues and engage in a fight with local authorities.  This is an interesting aspect particularly at the moment having discussed Martha Rosler’s views on documentary in the recent OCA Thames Valley group session.  John  made a comment on my previous post here  concerning the question of whether documentary should appear on a gallery wall and Allan Sekula’s statement that

Documentary is thought to be art when it transcends its reference to the world, when the work can be regarded first and foremost, as an act of self-expression on the part of the artist” (A. Sekula,  1984, p.58)

How does that fit with Tom Hunter’s work?  To me his work is art as well as documentary.  He points to the universality of contemporary stories; bases them in his own neighbourhood and has found his own creative voice. His work appears on gallery walls and in museums. At the same time his images have achieved positive change.

His Degree Show in 1994 was The Ghetto. He and others were trying to save their squatted street in Hackney from demolition and themselves from eviction.  He produced a 3D model of the street (in his words to us his neighbourhood became an art sculpture). He had begun using a medium format camera and produced transparencies whose effect resembled being transported into a cathedral with it stained glass windows. These transparencies were placed in the model. His tutors encouraged him to look at Dutch painting and he discovered Vermeer and his use of light and the painting of ordinary people.  After travelling around Europe for a couple of years he went back to his squatting neighbourhood. Possession orders were again being issued, and he returned to Vermeer in his quest to raise the status of the fight with the Local Authorities. 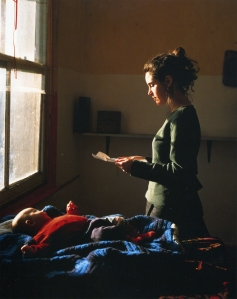 Reproduced with his permission

the starting point was Vermeer’s A Girl Reading a Letter at an Open Window .

Another example from the same series is the Art of Squatting . 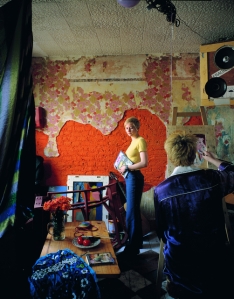 Reproduced with his permission

The Art of Painting (1665-67)  was known as Vermeer’s favourite piece.  Vermeer’s painting has cloth/tapestry on the wall – probably a map of the Netherlands.  Hunter’s reworking has torn wallpaper that, to me,  looks the same shape as the map. Subsequently he has taken influences from other artists and lives of artists such as Millais  and the author Thomas Hardy. Hardy based all his stories on true stories and Tom Hunter started to collect people’s stories from the Hackney Gazette.   He noticed that the same stories repeated themselves over and over again and re-enacted some of them in his series Living in Hell and other Stories

This works for me as an artist in contextualizing my work, giving it multiple layers and asking classical and contemporary viewers alike to question art’s relationship to society (2012, p. 7)

He has wanted both to document life around him; raise issues and represent the beauty and dignity of ordinary people and his surroundings. One of the questions raised during the talk was whether he thought his views had become compromised by moving from documentary to a more elitist area, being shown in the National Gallery or Saatchi Gallery for instance. Tom Hunter’s response was that he had wanted to involve the whole society in a debate about ways of living and being shown in these environments gave him the opportunity to put his points of view to a wider audience. Making scenes look beautiful (as he does) will bring people in from all sorts of backgrounds. In terms of ‘realism’ he described how photojournalists may also compose and stage their images; instructing people to “Move here. Move there”.

I wrote above about Tom Hunter’s easy and relaxed way of talking to us. His view is that you have to prove to people that you’re honest and straightforward and won’t be “taking the piss”. He said there is an art in the way you talk to people. If they say, “No”, then that’s an opportunity to explain and engage them. I think that’s a good rule to follow.  I also hope that he doesn’t lose this as he becomes more famous. I don’t think he will somehow.

Sekula, A Photography against the grain: essays and photo works, 1973-1983, Press of the Nova Scotia College of Art and Design, Halifax, 1984.